Sumber Mulia Group (SMG) has 3 official sales centers in the city of Jakarta which are:

Official contact information from SMG networks, including SMG’s official social media links, are listed in detail on SMG’s official website which is: www.sm-group.co.id

Be advised! Don’t be deceived!

SMG will not offer any product or promotion without going through SMG’s official channels / numbers listed in this announcement as well as listed on SMG’s official website: www.sm-group.co.id

Double check before making a payment!

Transaction with Sumber Mulia Group (SMG) will only be done through these official bank accounts:

Be smart! Be wise in your transactions!

If you received an offer via Email / SMS / WhatsApp / Phone using the name Sumber Mulia Group and its associated entities, please confirm the legitimacy with SMG’s hotline: (021) 69 100 50 or Email to: gostrike@sm-group.co.id

SMG is not responsible for any and all transactions made with parties outside of SMG’s official networks detailed in this announcement.

We're not around right now. But you can send us an email and we'll get back to you, asap. 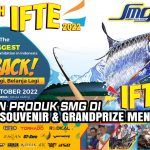